"BEST FOOTAGE FROM
THE CITIZEN HEARING ON DISCLOSURE"

We hope this was a good presentation, so that something possitive may come from all this after all.

DISCLOSUREGATE – THE MUSICAL – ONE YEAR CELEBRATION!

A year has passed since we [#Artists for #Disclosure] withdrew our support for Stephen Bassett/PRG, due to ethical breaches, that could not be tolerated according to our terms of agreement. In light of recent events [Click here for "Smut Ufology" video/blog], I thought I would take a closer look, at what happened the past year, and provide some hardcore stats, to back up my views.

With the unique clicks & interactions, a total of 194 – 1039 signatures on Disclosure Petition VII - CongressionalHearing attributed to the #Artists for #Disclosure campaign is a realistic, educated approximantion, based on the available stats/documentation, which means that approx 1 - 8% of all the Petition VII signatures could come from our campaign. And with the 100's infamous "E.T from N.Y" this percentage is somewhat higher. 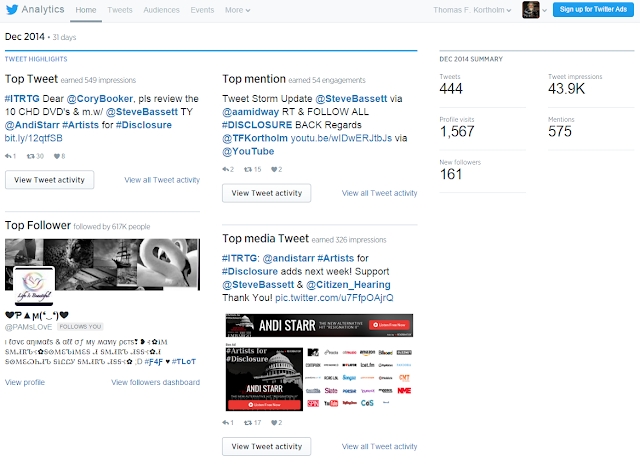 [Full stats & calculations in the bottom of blog post, click here for full scr. prt. documentation. Please note I only use 2 scr. prts from Twitter, I don't intend to give away all details of my artist/ management skills for free.]

Please note, that I have disregarded stats from Facebook, since our Disclosure page was closed, because it was flagged for spam/abuse by 60+% of the group/page admins, who asked me to share the possitive reply from Beto O'Rourkes staff, regarding review of the CHD DVD's. Just another day in "Dirty Disclosure" & "Smut Ufology".....

One can only speculate as to why, the campaign was met with such resistance from Steven Basett/PRG and especially The Disclosure Lobby [Elizabeth Trutwin] on Facebook, and why Stephen Bassett would sabotage his own campaign, by sharing broken links in newsmails & on Facebook, and claiming a [White House?] hack attack was responsible.
[Link to PRG newsmail dated January 14, 2015, deleted from the official PRG news archive] 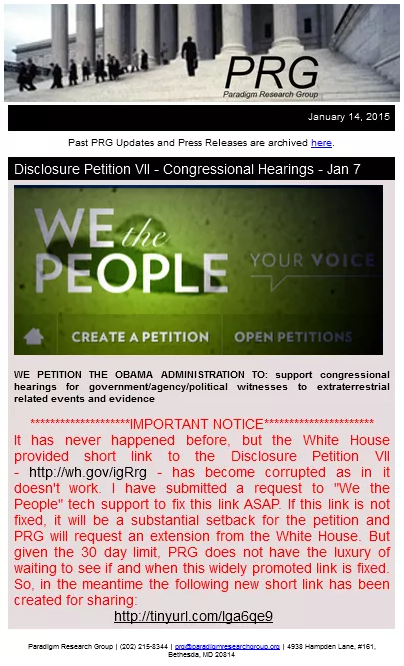 The alligations that the #Artists for #Disclosure campaign was somehow "hoaxed" or some form of disinfo campaign, is clearly not feaseble, considering the documented effects of our campaign.

The goal of the CHI campaign, was to arrange for meetings with representatives, commities etc., in 2015, and since that didn't happen, one must consider the initiative as a failure.

According to PRG's newsmail, meetings & plans is ongoing from March 8th., 2015 until December 21st. None of these meetings have been documented, no mentions of what commitee, staff or representatives, and no dates for these supposed meetings. Still, it states in the December 21st. Newsmail, that the cost of running this campaing is 4000$ monthly. A lot of $ for undocumeted meetings, with unkonwn commitees & politicians.

Example from PRG newsmail, December 21, 2015, stating: "meetings have taken place with both House and Senate staff." 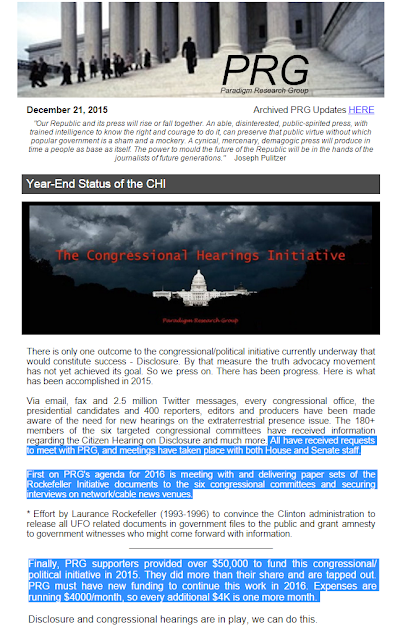 #Artists for #Disclosure was a considerable success, but only brought a brigade of "real disclosure" trolls & "smut ufologists" responses, that have plagued my person & profiles on most social media ever since. I get regular messages & comments, calling me everything from CIA, NSA, Reptillian, liar, fraud, idiot, or like after a live hangout with many russian guests, a Putin spy trying to make americans docile, [using the dark side of the force?] so they wouldn't be able to resist the coming russian invasion. Usually I just laugh at these batshit crazy alligation, and block/delete the meassages, it gets on your nerves with so much hostility and negativity.

The latest example, however, was unfounded criminal alligations [child rapist] against my person, first in a private message, I was initially allowed to publish, but as usual that was retracted when I did. Afterwards, the same alligations was repeated in a very threatening phone call by same person, and publicly in comments on Facebook, Blogger, YouTube & related hate "smear" photos.

Including what can only be seen as homophobic insult, to your/our american Ambassedor, Rufus Gifford, who happens to be openly and proud gay, and got married to his partner, here in Denmark in November 2015. 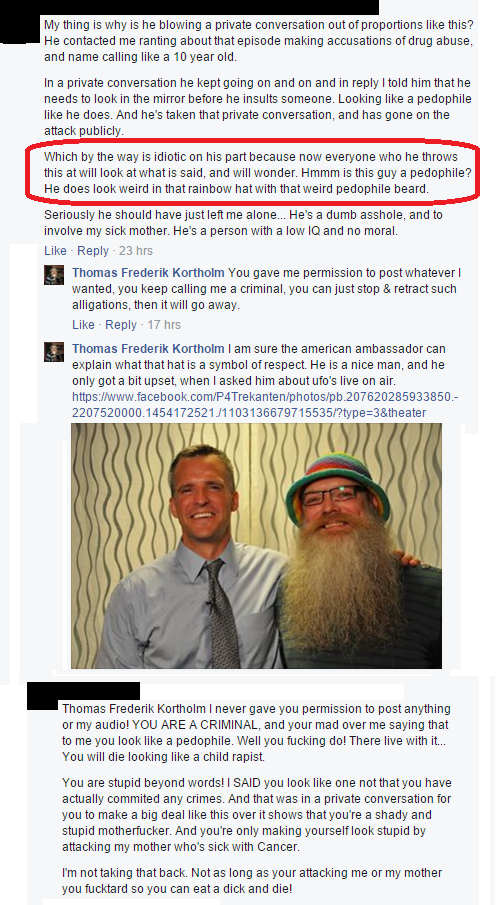 THIS SORT OF THING IS ILLEGAL & ENDANGERS ME FROM VIGILANTIES! 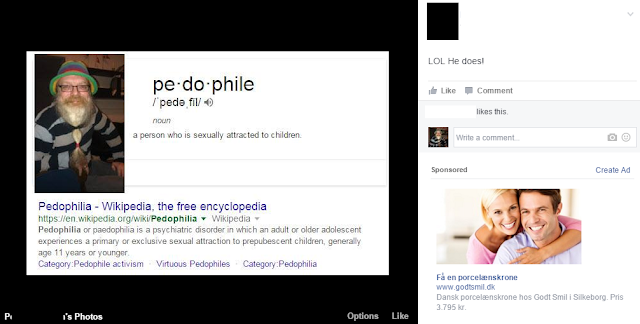 This entire ignorant stampede of crazy alligations, has been the inpiration for my latest song/video for "DisclosureGate – The Musical" called "Smut Ufology"

All documentation has been blacked out/garbled for anonymity - a courtesy not needed considering the crimes commited according to §266 (or§267) in danish criminal law, punishable by fine or up to 2 years imprisonment. Since there are 1000's of Steve Bassetts & the likes of the anonymous smut ufologist, but only one family in the world with our last name, every batshit crazy criminal alligations, that are tossed my way in public, endangers my family from weird ass tinfoil helmet types & possibly crazy vigilanties.

So, I have decided, that after more than 2½ years working actively to help disclosure in the U.S, and getting so much crap, crazy alligations & massive trolling on all social media, I no longer have any reason to believe, that disclosure will come from selfproclaimed "ufologists" & "real disclosure" activists, who only seem to be in the game for money, drama and attention, who use any means to cover-up, the total lack of any documentation of political/press related success, but plenty of  failed projects and amatuerish mismanegement of funds.

Dozens of "Smut Ufology" hustlers seems full of crap, and turns extrmely hostile and profane in a heartbeat, especially if what you do or say, could actually draw attention away from their donate buttons, and to the total lack of substance behind their wild claims & alligations.

I will continue the contact work, but in our view, american disclosure is a lost cause, a total waste of time & money. For the same reasons, we're getting rid of "disclosure" in our official group name.

More songs & videos for "DisclosureGate - The Musical" already in the making will be finished, and that will be the final statement, when it is done in time. 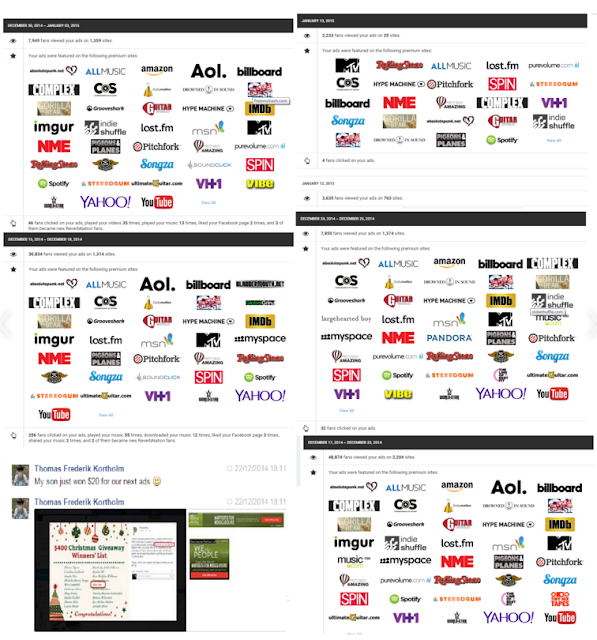 Since November 5 [2014], over 1,300,000 [CHI Status] or 2.500.000 [PRG Newsmail, December 15, 2015] Tweets, Faxes, Facebook and email messages etc. have been sent to congressional offices announcing the Congressional Hearing Initiative (CHI) and the DVD set deliveries. How PRG & Steve Bassett arrives at these numbers remains to be seen. 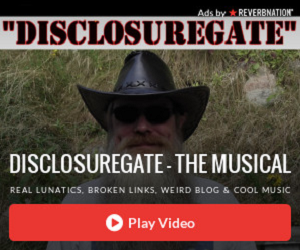